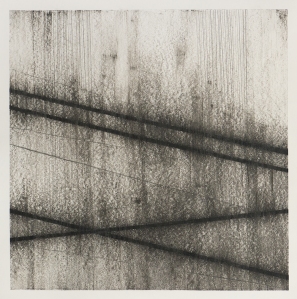 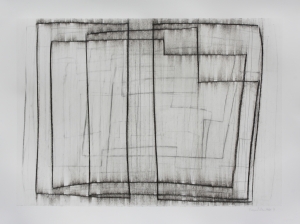 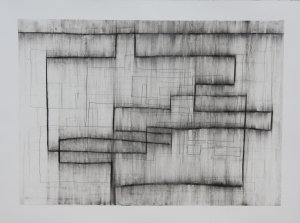 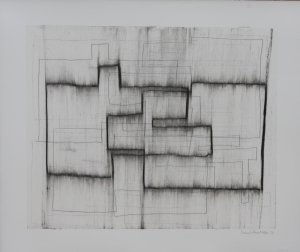 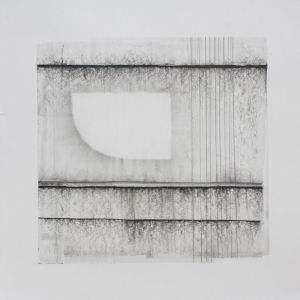 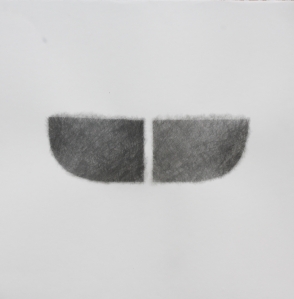 When Fiona Robinson won the National Trust commission to make work in response to to High Cross House her research moved across architecture, sound and movement. Music has become increasingly influential and she is currently working on a project making  work in response to the Bach Suites for unaccompanied cello.  Earlier work included drawings centred on John Cage’s compositions for prepared piano. Robinson’s work draws attention to the relationship between repetition, process and denouement across sound, text and visual art forms and memory is a significant element of the process. Making work in response to the architecture of High Cross House was a new departure, but these ideas were subsumed into ongoing work so that the shape of the house, the sounds, the silence and the echoes of the building, added a further layer of structure and meaning to the drawings.

“When I was invited to exhibit at High Cross House it was the unforgiving straight lines, the starkness of the building that attracted me.  However it was the immensely seductive curve connecting the two sides of the building which seeped, unbidden, into my drawings.  As an outside wall it was it was situated in another space, as an inside wall it was a boundary, both nurturing and protective. It became a starting point for a journey into an uncharted area of lines and tones and mark making, each drawing leading only to the next one, always with a sense of not being able to see what would happen next.

The first time I visited High Cross House I was expecting a white building and severe straight lines.  I was shocked by the intense blue of the exterior and entranced by the curve of the study wall. A young musician spent most of that day playing the beautiful Steinway grand piano that still sits in the room which Lescase designed around it.  The sounds of the pianist’s mellifluous, seamless music flowed and echoed throughout the building, filling the spaces where I was drawing. The experiences of that day were the initial impetus for the subsequent drawings.”

A significant amount of the work made for the High Cross House commission focuses on the curve that connects the two sides of William Lescase’s stark modernist structure. Other pieces respond to the shape and surface of the building or were influenced by the copies of the floor plans piled up on a shelf in the study. As the work developed the straight lines and blocks of the building bent and curved in response to the remembered flow of movement of people and sound through the interior and exterior spaces. Music is an underlying theme throughout; the mark-making developed in response to the sound and vibration of bowed or struck strings: piano, violin, viola and cello. This visual language had its genesis in experimental studies using ink on plucked strings, made whilst listening to the music of John Cage. The rhythm and sound of the strings snapping against the paper was a significant element of the process. The reference to Cage does not imply a relinquishing of control over the final image; these drawings are orchestrated and considered reflecting the measured tones of Bach as much as the randomness of Cage.